Looking at Natsu who got put down in an instant, the surrounding Fairy Tail members got quiet before quickly making a fuss.

“This dragon slayer is a tad bit too weak innit?”

“Nonono, Natsu is pretty good, his magic power is outstanding amongst peer. Except for Erza, in our guild, only Gray could have competed with Natsu!”

“So to say, Natsu isn’t weak but little Noah is just too stronk?”

“I knew it, the grandson of guild master won’t just have enormous magic power as his advantage!”

The Fairy Tail members continued to make noise. As fellow guild members, adults, and magicians, they could see just how tough Natsu is. Naturally, they could see what Noah is made of as well.

But perhaps because of this, seeing the dragon slayer they had so much expectation of got laid down on the floor in a single bout made the spectators a bit at a loss of how to react from the sudden twist of things.

Disbelief is written all over Gray’s face as he saw the image of a mowed down Natsu, his mouth turned into an O shape.

“When did this fellow get so strong?”

Makarov stood at the front part of the group of spectators. He looked at Noah with his hand still on the sheath, looking a bit careless with not much change in physical position and then he looked at an unsurprised Erza who looked like this outcome is as it should be before the old gramps laughed.

The surrounding noise seemed to have nudged Natsu back into his senses. He  jumped back onto his feet and stood up while leering at Noah.

Noah muttered in a confused way.

“When did I ever misled you?”

Natsu grumpily screamed at him.

“You lied to me when you said you didn’t know magic!”

“First off, I never said that. Second, even if I did, I am not lying!”

Noah waved his hand not sure to laugh or cry.

“What I used just now is a simple strike without any magic power in it. Surely, you wouldn’t call that magic?”

Natsu choked and boiling anger started to rise up within him.

“Are you saying you can beat me even without using magic?!”

Along with Natsu’s angered roar, a bunch of hot flame started burning up all over his body, covering Natsu’s body. Seeing as the air around him started to distort, the temperature is definitely not low, it’s probably stronger in intensity than the flaming punch just now by lord knows how many magnitude.

The change brough gasp to everyone around there, even Noah is surprised.

He could clearly feel magic power growing more or less inside Natsu along with his outburst of anger. The flames also became more salient, it’s like his emotions are all transformed into burning hot fire.

So this is Lost Magic huh?

“Watch me beat you!”

Like a creeping cheetah, he sprung forth with a powerful stomp of the ground, his figure burst forth.

The flames on him drew a long tail making Natsu who’s in flight look like a meteor. Along the way, dust and debris flew all over, the temperature of the air soared, even Noah could feel his face warming up.

Under the alarmed scream that didn’t scatter in time, Natsu who had transformed into a flaming meteor reached Noah’s front, the flames gathered and he rushed at Noah with a headbutt.

Getting a power boost, the attack this time drew a strong gale making Noah turn a little grim.

Even so, Noah has no intention of backing down.

His right hand reached for the sword hilt, lowering his body like a lion that’s about to charge he then stayed silent for a brief while. Not retreating but advancing, he  rushed at the oncoming flaming meteor like an arrow shot from a bow.

A dazzling sword beam appeared amidst the gasp, shock and surprise of the crowd judging by their expression and gazes. It appeared like a waning moon in the night, accompanied by the whistling of the sword slash, the beam seemed like it could cut through space as it collided with the flaming meteor.

The waning moon esque sword beam passed through the flaming meteor like a hologram, in a manner similar to hitting a water’s surface, it rippled and flashed before coming out the other end of the flaming meteor.

And when it did, the sword beam and flaming meteor disappeared at the same time. Without any trace, it’s like it wasn’t there in the first place.

At the center of this place, Noah stood with hands still on his sword hilt. Meanwhile, Natsu stayed in his position that looked like a cheetah ready to pounce. They both had their heads lowred so it’s not clear what expressions they had on, it’s as though nothing happened.

However, nobody would believe what they saw just now is a hallucination.

That’s because the temperature of the air has not yet decreased and there are still debris and dust spread around.

Furthermore, Noah and Natsu’s position switched, with their back against each other the situation is the reverse of what it had been at the start.

Fairy Tail members all around held their breath subconsciously, lest they make any sound.

Makarov, Erza and Gray kept their eyes on the two with stern expressions as they observed the proceedings.

Soon, the silence is broken.

Natsu with his back turned towards Noah mumbled. His eyes started circling like he’s drunk, he tottered and then fell down on the ground, unconscious.

Only now did Noah lift his head and removed his hand from the sword hilt. He glanced over Natsu on the ground and gave a ‘V’ sign towards Makarov, Erza and Gray.

The spectators returned to their senses and laughed while giving thunderous applause.

“Looks like someone got stronger! What a great slash!”

“As expected of Gramp’s grandson, what a bloke!”

Everyone here is a magician of Fairy Tail. The weakest among them is many times stronger than Gray. Although not everyone can comprehend what happened. A majority of the people here still knows.

They know that before Natsu’s full power, over drived state headbutt could land, Noah sped up and drew his blade to land a strike on Natsu’s solar plexus at the exact moment they brushed by, rendering Natsu unconscious in what seemed like a flash of sword beam to the majority of the spectators.

Judging from Noah’s stance after the attack, after landing the attack Noah used a speed for fast it’s hard to catch to return the blade to its sheathe.

Various factors came into play resulting in the switched position, back facing back scene that unfolded.

Naturally, going by how Natsu is only unconscious, Noah showed some mercy. He didn’t use the edge to attack or else Natsu will be swimming in his own pool of blood.

“How could he get so strong by himself like that, how sneaky!”

Makarov haha-ed when he heard Gray mumbling to himself. Turning around, he looked at Erza.

“Sorry, Noah made you worry for nothing.”

“It’s his own effort that he could exhibit such impressive sword skills!”

Erza dismissed while shaking her head. She smiled when she sees everyone encircling Noah.

“Plus, I myself also received quite a lot of care…”

Makarov nodded with a wide grin before changing his sight over onto Noah, his eyes mellowed as he continued.

Tl: In case anyone is wondering, this is all happening sometime before Natsu made an appearance in the guild and after Erza arriving in the guild. Not sure about Gray but I think he’s been in the guild for quite some time. Point is, soon this picture will be complete huhuhu. 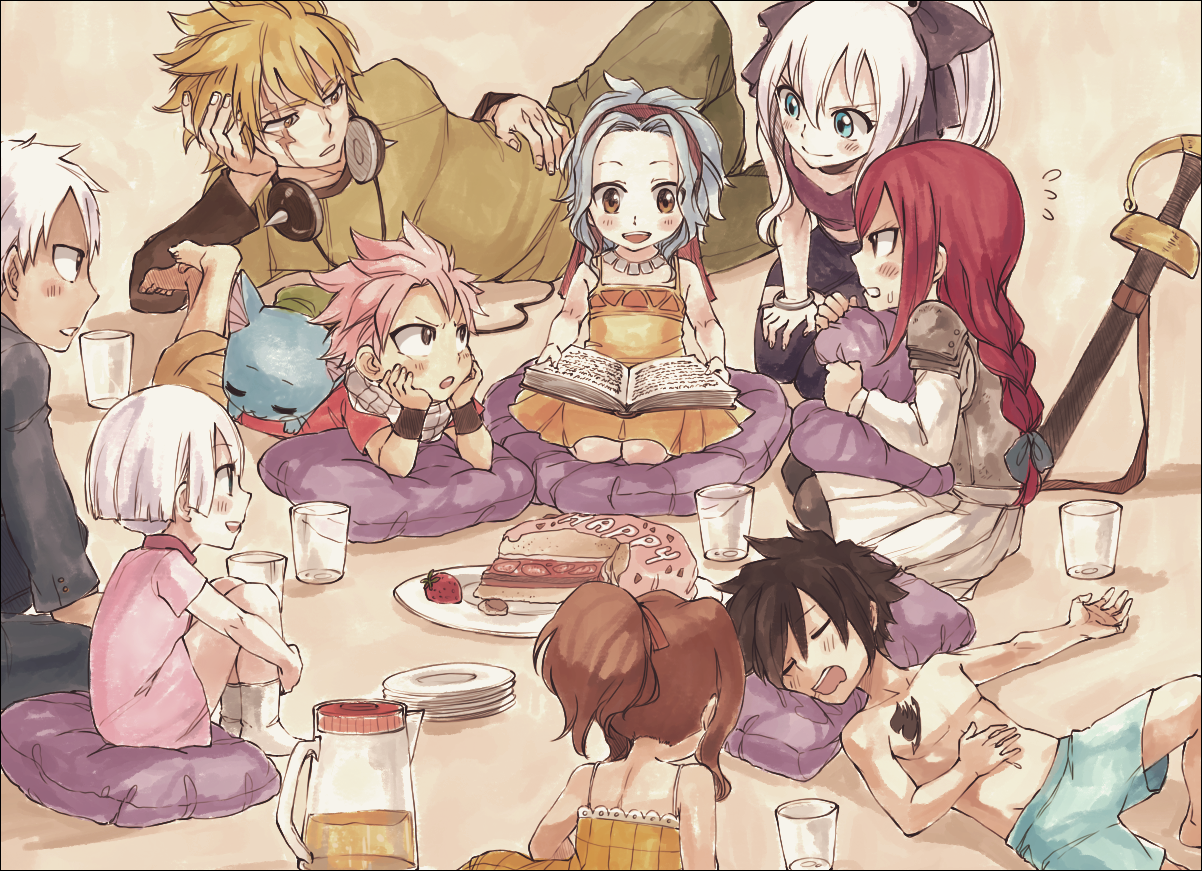